It was just before Christmas on the south-west coast of British Columbia.  It had been raining for a month and was still raining as we arrived at the old yard office at Port Mann to wait for our connection to arrive from Vancouver.  It was just after midnight and this trip promised to be a good one.

Conductor Jack Goy was talking with a young girl from the Car Control department who had just come in after being out in the rain for a half hour or more.  She was cold and wet, and Jack seemed to be trying to cheer her up.  She said she was looking forward to getting a better job, where she could work in the daylight and make more money.

Tail-end brakeman, Jack Grassick brought our train orders into the office after picking them up from the operator, and I was looking through the 'Bulletin Books', checking for anything new that migh have been added since last trip.

I was going over the orders with Jack when our engineer, Bill Halicki came in.  Jack gave him a copy of the orders and we went hunting for a cup of coffee from the staff lunchroom.  Our train had been delayed at the Fraser River bridge, and wasn't expected for about an hour.  We had time to kill, but we were warm and dry...., and..., we were "on pay." 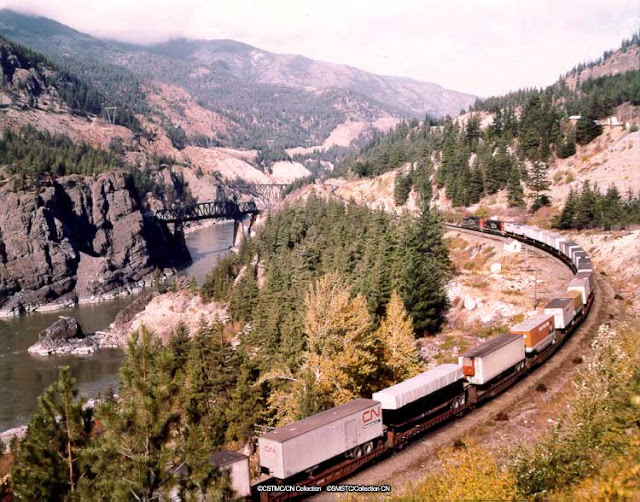 Photo by G. Richard, courtesy of National Museum of Technology
﻿
I was looking forward to getting on the engine with Bill, as he was a cracker-jack engineer, known to be fast, but accurate;  one of the best with air and throttle.  It would be an exciting run.  Our train was the eastbound speed train, called 218.  It was made up of piggy back trailers on flat cars, containers on flats and other high-value traffic for the east.  There were always a minumum of three SD40-2's at the head end and the train was given priority over just about everything else on the road.

I was in a good mood.

Grassick and I found the coffee pot full and fresh, so we poured four and brought coffee out to Bill and Jack Goy, who was by now deeply involved in a conversation with the young blonde car control clerk.  Grassick grinned and said that Goy would probably get the girl fired and would have to support her until she 'got back on her feet again.'

But the yardmaster stepped in and asked us to go to the train crew's area of the building so the staff could get their work done.

We wandered away and sat down with our coffee to wait for our train.

But conductor Goy, who always seemed to have a smile on his face and an impish twinkle in his eye, walked back into the main office.

When Grassick saw what Goy was doing, he laughed and went into the office as well.

Several minutes passed, and the two men came back, both of them enjoying a good laugh.

Now, I have to tell you a bit about conductor Goy.  He was a big man, not overweight, but tall, with a large frame, and muscular.  He enjoyed drinking Scotch, but only when he was off-duty and was active in his community.  But he was a prankster, and that's what had put the big smile on his face this night.

Jack Goy had taken five One Thousand Dollar Bills from the large wallet that was chained to his belt and had put them on the photo-copier.  After printing up numerous copies, the took the sheets over to the paper cutter and neatly cut the paper to create a stack of black and white, fake one thousand dollar bills.  Feeling magnanamous, Jack then went from desk to desk, giving each of the employees a $1000.00 Christmas present.  You might guess how that was received! 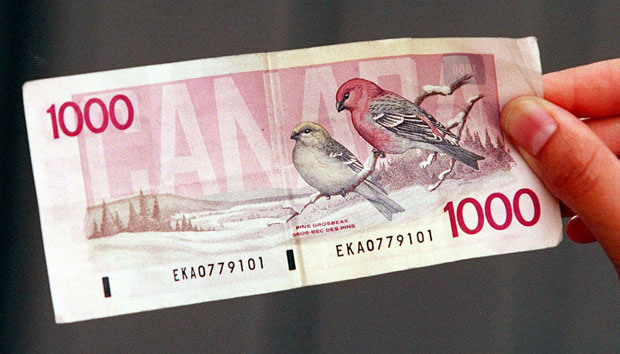 Google pix
﻿
A couple of hours later, we were flying through Chilliwack, whistle blowing for the Young Street crossing.  The rain was falling with such intensity that the windshield wipers couldn't keep up and it seemed that we were driving through a waterfall.

The radio came to life and Jack Goy wanted to talk with me.

It soon became apparent that, in his joyful exuberance, and in the spirit of Christmas, he had left all of his $1000.00 bills under the cover on the photo-copier in the yard office.  Needless to say he was concerned and wanted to know if I had picked them up, or had seen someone else pick them up.

I told him that I had been in the waiting room with Bill all the while he was giving away tens of thousands of dollars to those under-paid office staffers.

I felt pretty sure I knew who had the money, but I would let it lie for a while.

Conductor Goy called once more about the money as we were going through Komo in the Fraser Canyon.  Again, I told him that I knew nothing about it. 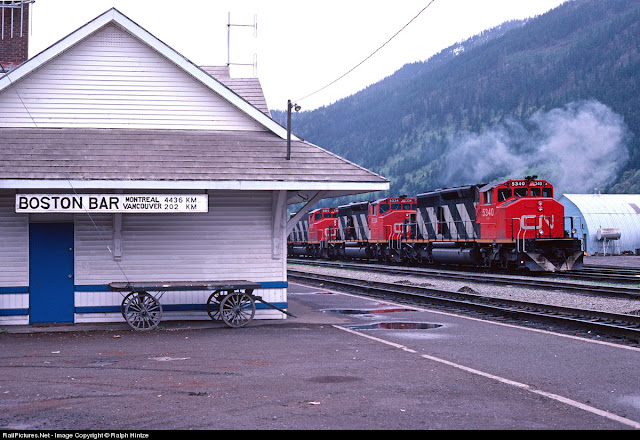 Thanks to RailPictures.net for the use of this photo
﻿
﻿
Arriving in Boston Bar a half hour later, we got off the train and made our way to the bunkhouse, where we left our gear and went back down to the Beanery for breakfast.

Walking into the well-lit Beanery, we found a couple of local residents and and the shop foreman having coffee.

We sat down to order.  Goy removed his wallet from his pocket and searched through all the nooks and crannys one more time.  He was crest-fallen.

Expecting an immediate reaction from Goy, he was prepared; he slapped down a stack of $1000.00 bills on the table.  Goy snatched them up, even before they had a chance to settle there.

Goy was quite relieved, as you can imagine..., but he didn't buy coffee or breakfast for the crew.  I guess that was why he had a stack of money in his wallet and I didn't!!!  :-)

Grassick cancelled the steak dinner and opted for something much lighter.
Posted by Bruce at 10:33 AM

Email ThisBlogThis!Share to TwitterShare to FacebookShare to Pinterest
Labels: 218, canadian thousand dollar bills, robbery at the train station, speed train in the canyon, the joke is played on the joker