In this blog post, I want to visit the Alberta Railway Museum at Edmonton, Alberta.
Any railway museum is a great place to visit, anytime.  It gives people of all ages an opportunity to get up close and personal with the railroads of the past.
Some museums host static displays of different types of railway cars, handcars, speeders and lanterns.  There might be a replica of a working station, including the telegraphers wicket, the waiting room with a coal stove, and the operator's office with the sounds of Morse Code messages being transmitted between stations.
When the Morse went quiet, as it usually did until the next message needed to be sent, the sharp 'tick-tock' of the Seth Thomas railroad wall clock kept time for the swinging pendulum that went from side to side inside the glass fronted door in the oak-cased clock.  Even when there was no one about, the sounds of the station told you that you were never alone.
Breathe deeply, and I'm sure you can hear those sounds from your youth, or recall them from your parents, or grandparents time, when 'train time' was gathering time for the small communities along the rail line.

After the train had left town and the sound of the exhaust stack and the clicking of the trains wheels had faded around the bend and disappeared beyond the trees, the walk home promised carefree conversation, the scent of Lilacs in warm air and perhaps an ice cream cone at Gertie's Ice Cream Parlor.
Surely, this was the vision that men such as Shaughnessy and Van Horne; Sir John A. Macdonald and George Stephen had for the Canadian Pacific Railway.
On the other side of the railroad map was to be found equally enthusiastic railwaymen; enthusiasts who had a vision, and believed in that vision.  Charles Melville Hays of the Grand Trunk, William Mackenzie and Donald Mann of the Canadian Northern, all contributed greatly to the eventual evolution of 'the people's railway.'  (see "The People's Railway" by Donald MacKay - 1992)
Museums hold wonderful collections of artifacts that, except for those that are cloistered away in private hands, one doesn't get to see.
The Alberta Railway Museum is being featured here because of the love and devotion of its volunteers to a project that has stolen their hearts, all of their free time, and much of their own money, I'm sure.
I'm speaking of the ex-CNR H6g class 4-6-0, or ten wheeler that carries the number "1392" beneath her cab windows and below her headlight. 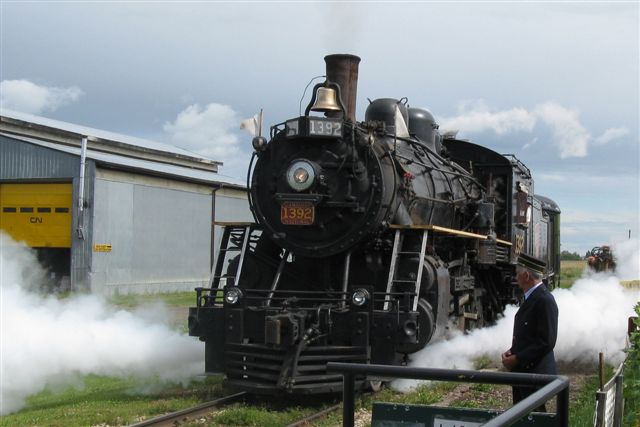 Courtesy Terry Wolfe of the Alberta Railway Museum﻿
She was built in 1913 by Montreal Locomotive Works.  On her builder's photograph is a note that reads 3rd week of April, 1913.  She made steam until she was retired in June 1958, and was donated to the city of Edmonton, where she sat on public display in Exibition Park until the Alberta Railway Museum stepped into the picture.
I have to admit that my exposure to the 1392 is limited, indeed.  In fact, the first time I saw her was when she steamed in Vancouver for Steam Expo 86.  There were many steam powered machines at that event, and one of the prettiest was the ex-CNR H6g number 1392.  She appeared in beautiful condition and showed well.
Unfortunately, my role as a presenter at the Brotherhood of Locomotive Engineers booth prevented me from getting more photos of the event, but I did manage a few. 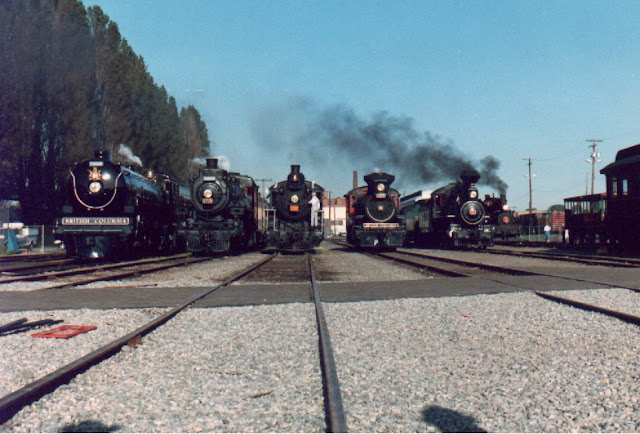 A Full House - by Bruce Harvey 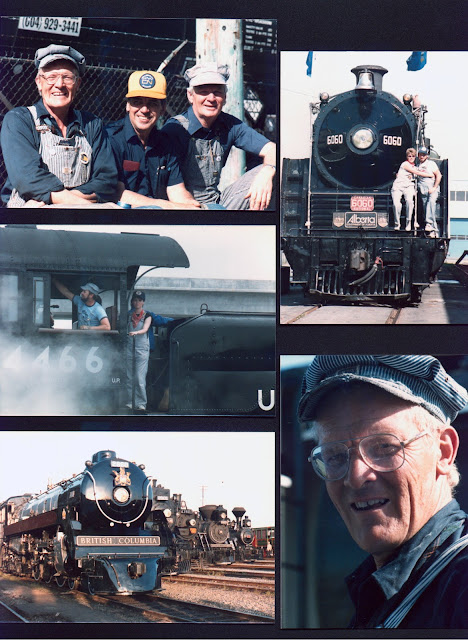 ﻿
Upper left, Harry Home, Cal Elliot and Dennis Strate.  Buddies since their early days as firemen.
Upper right, Bruce and his wife, Susan on the pilot deck of the 6060
Middle left, Susan 'working steam' on UP switcher 4466
Lower left, another angle on the 'full house'
Lower right, the Happy Hogger, himself..., Harry Home on arrival in Vancouver with 6060
Enough about Steam Expo for now.  I'll bring you back to Steam Expo Vancouver in July 1986 with another story.
Steam Expo 86, as an event was testament to the love and devotion that volunteers give to the preservation of the wonderful artifacts of a time gone by.  But it's not just a page from the past that's significant in the preservation of railway equipment; it's the physical proof of the commitment of a nation, its leaders, in financiers, its contractors, its labourers and the families who stood by them.
But events like Steam Expo are simply the icing on the cake, if you will.  The real meat in the recipe is the behind-the-scenes work that goes on in the off-season. 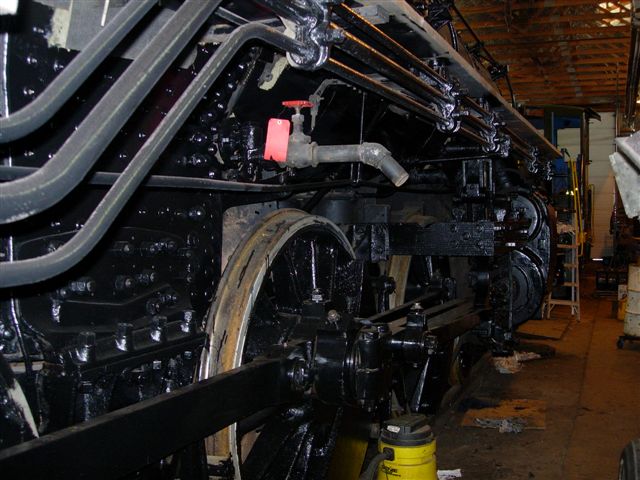 Inside the shop, volunteers spend countless hours and, I'm sure..., countless dollars from their own pockets, as all volunteer organizations are constantly in need of money to survive.
As well, there's more to a railway museum than the steam engine.  There's rolling stock to acquire, move, strip, repair, restore and, finally to make ready for certification.  Track must be maintained, switches serviced and structures to be kept in pristine condition.
And there's testing to be done!  Here, a Cat Scan is being conducted by a volunteer. 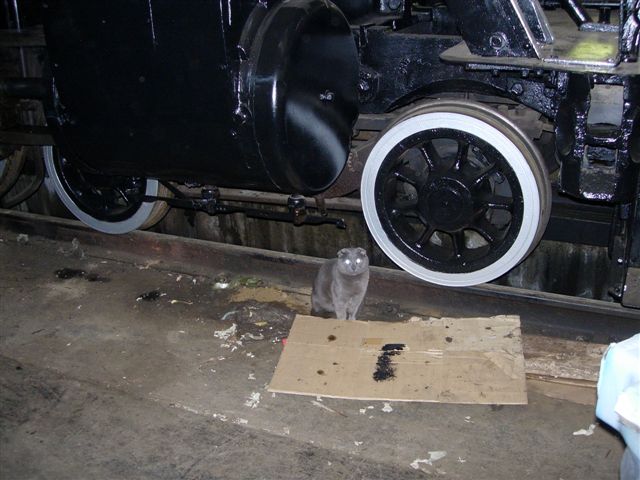 ﻿
For, without all that taken into consideration, there can be no valid reason to throw open the doors and say...
"We're open. Bring your family for a fun day at the railway museum".
Why do they do it, you may ask?  It's not for the money they hope to receive during their short operating season.  It's not for the skinned knuckles and bruised shins, or the oil soaked clothing, or the dirt under their finger nails that they do this. 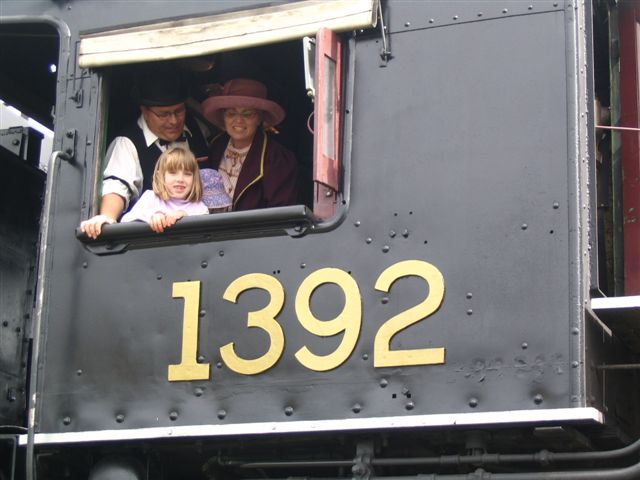 ﻿
It's for the smiles on the faces of children as the brass bell begins to ring.  It's seeing a child plug his or her fingers into their ears as the engine approaches, whistle blowing.  It's knowing that, at the end of a long day at the museum, grandparents have taken their young charges home to tell them stories of a time long ago, when the haunting song of the steam engine's whistle drifted through their open bedroom window on the cool night air.
These are memories of a quieter time, a safer time; a time of oil lamps and long hikes to school.  There were station agents and grey mail sacks piled high on green baggage wagons.  People were polite to each other and, for the most part, you could believe the word of a politician.
What does a museum hold for you?  Why, it holds all the sights and smells of your youth, when your parents were young and a treat was getting two bits to go to the 'show' on Saturday afternoon and have enough left over for a candy bar or a soda.
Even if you don't take anyone with you, you owe it to yourself to visit the Alberta Railway Museum this year.  And, if you can make it.... go and visit them for the 100th Anniversary Celebration of the ex - CNR H6g 4-6-0 steam locomotive.  And, if you can't make it to Edmonton..., visit your closest railway museum.
Make plans to go this month or this summer, but don't put it off any longer than you absolutely must.

HELP US CELEBRATE 1392'S 100th BIRTHDAY
May 18, 2013 starts the new season.
See and ride behind 1392 on the museum grounds.
Long weekends are planned as well as some special events.

Phone for information: 780-472-6229
﻿
The Alberta Railway Museum﻿
Address and Map
Take a few minutes to visit the website and be sure to click on the video to see the 1392 in action.
Make sure you take enough time to visit all of the exhibits at the museum while you're there!  There's lots to see.﻿ 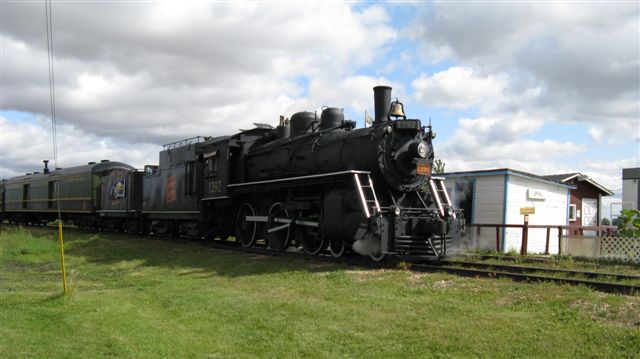