Looking back on more than 35 years of railroading in my own career, and several years before that,  sitting at my father's side, I listened attentatively, while he and his fellow railroaders shared stories of their steam days on the railroad.  I have come to appreciate the joy and the purpose of story-telling.

The excitement of running steam on train orders, timetable meets, running short of coal or water, break-downs on the road, fallen brake rigging, hot-boxes and other delays that would cause the engineer to 'whistle out a flag' to protect one or both ends of his train; these all come together in 'real time' when a handful of 'rails' get together at a small round table that's loaded with glasses of beer and an ashtray.  It's then that railroaders can relax and talk about their trips, the difficulties they were presented with and how they handled it all.  They could laugh at themselves and each other with no hard feelings.

Railroaders aren't unlike others who spend a lifetime in other occupations; but they are unique in their devotion to a job that offers so little in the way of creature comforts.

No two trips, or shifts are completely alike.  There is always something that will create a spark that can turn into something really unique that must be dealt with...., always something different to experience and to talk about.

Stir into that mix the fact that with few exceptions, one seldom encounters the same fellow crew member(s) on successive runs.  This alone, adds new ingredients to the recipe that will ultimately shape your day.  When my engineer father was running steam out of Capreol, Ontario in the 50's, I would sometimes answer the phone that hung on the wall near the front door.  It was one of those old phones that had a cradle that protruded from an oak box.  It had a crank on the side that, when turned, would ring a bell in an office down in the village. An operator would connect the lines, using plugs and wires and then she would say "Number Please?" 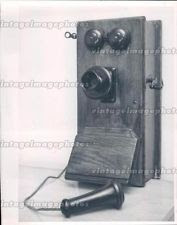 
Internet image. Vintage Image Photos
﻿
Dad allowed me to take his call when the crew office phoned, but he insisted that I ask the crew caller who the fireman was to be.  I knew instantly what dad's trip was going to be like by the look on his face when I gave him the fireman's name.  If the fireman could fire an engine properly, dad knew he could make that train sing!  He'd be running on short time, knowing that he could rely on the fireman to keep the engine steaming, rely on the brakeman to run for the switch so he wouldn't have to stop the train on a grade, and rely again on the brakeman to do what would be necessary to flag "The Varnish", in case they were just a minute or two shy of getting into the clear without slowing or stopping the passenger train.

Mooch Delgreco, when he was a brakeman out of Capreol has told me of climbing up on top of the boiler, waving a lighted red fusee in order to be seen more clearly by an approaching passenger train that was running 'on time,' while dad and Mooch were running on 'short time!'  (Meaning they should have been in the clear five minutes ago)

The trust that develops between crew members can make or break the trip.  It's what makes a good story, regardless of how the trip unfolded, or ended.

Railroaders soon learn that when they throw their hat into the ring and start to tell a story at one of these 'wobbly-pop' fueled gab sessions, they have to stick as close to the truth as possible, under the circumstances.  If they're caught out in a fabrication of the 'facts,' they will lose their audience very quickly..., unless, of course it's a particularly funny, or entertaining story, or the story-teller himself is the butt of the joke.  In that case, they'll hear you out just because everybody enjoys a good laugh.

The yarns barely miss a beat while the table is re-loaded.

Flash ahead to 1966 on the Albreda Sub

The main line between Edmonton and Vancouver was flooded with train traffic.  Winter had come early and stayed late, much like an un-loved relative.  But now the trains were running more often than the crews could handle them.  We were trying hard to keep up, but each trip was much longer and harder than the ordinary.  The mileage regulations had been suspended and men were working as much as they cared to, and more.  The General Yardmaster in Jasper was kept busy trying to pry sleepy brakemen out of their beds, even when they had booked rest after making three or more round trips without time off between runs.

On one such night, we pulled into the yard at Blue River with instructions to 'yard the train' and put the engine to the shop track.  There were no Kamloops crews in Blue River at the time and the first freight coming east wouldn't arrive for another four or five hours.

When the Kamloops crew arrived, their train would be waiting in track three with the engine on the shop track; we would get a 'main line connection' with their train.

Normally, this wouldn't have raised an eye-brow, but on this night we already had 12 hours on duty and we hadn't been off the engine for a break, other than to shovel snow and sweep ice out of all the switches we had to use to get in and out of nearly every siding on the subdivision.  It had been "one of those" trips, and we were hoping to get into the hotel beer parlour or the Legion before closing time.  There would still be time for three or more hours sleep before heading back to Jasper.

I lined the switches to enter track three, and when I climbed back into the cab, the engineer, Danny Lubarsky said that the conductor had called on the radio, saying that he would bail off at the station and make a run for the Legion.  If he could get inside before closing, he would load the table and tell the bartender that his mates were not far behind.  This would give us time to put the train away, put the engine to the shops and scurry up to the Legion.

Arriving at the Legion, we looked through the window in the inner door and saw our conductor sitting at a table with five chairs and a couple of dozen glasses of beer..... waiting..... for us.

Just then, the burly bartender stepped in front of the window and, holding up his watch, he shook his head and turned away.  The conductor shrugged his shoulders and picking up a glass of cold beer from the table, took a long, slow drink.

The bartender returned, grinning and opened the door.

The place was crowded to the rafters.  Seemingly, the whole town was there.  We pushed through the throng, making our way to the table, and our well-earned beers.  Arriving at the table, we each reached for a chair, preparing to sit down to a refreshing, thirst quenching, cold glass of beer or four. 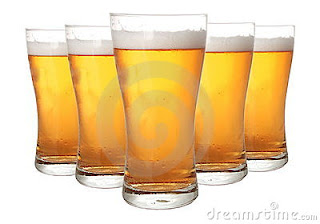 Then, without warning...., our conductor, my fishing buddy and a valued mentor, identified here as "K-Double A" reached inside his mouth and pulled out his upper denture, and holding it between his thumb and fore-finger, he dunked it in as many glasses of beer as he could manage, hop-scotching around the table-top like each glass was a square on a checker-board!!!  Each glass that he plunged his teeth into began to foam vigorously, spilling over the top and onto the terry-cloth table cover.

Frantically, we grabbed at the glasses that weren't yet foaming from their recent salivary intrusion claiming them for ourselves!!!!

Fitting his teeth back into his mouth, he said...."There you go boys!" "All the ones that are foaming, are mine."

Some stories last longer than others.

Email ThisBlogThis!Share to TwitterShare to FacebookShare to Pinterest
Labels: a beer at the end of the rainbow, but mostly thirsty for a cold beer, teamwork makes it happen, The value of a good work-mate, tired, wet and hungry