Christmas Arrives on the Albreda Sub.

For weeks, the railroad has been working 24 hours each day in an effort to clear a backlog of traffic.  A couple of major snowstorms that have blown in from the Arctic closed the rail line temporarily.  Crews battled the elements as the snow filled trackside ditches and formed deep drifts across the landscape.  In places where the wind was kept away by steep mountain terrain, the snow fell, and gathered where it lay.  Fir and cedar trees became laden with heavy snow while the roofs of section houses, motor car sheds and telephone cross arms carried great caps of snow that seemed to flow like slowly melting ice cream.

Snow plow crews, working around the clock became exhausted; as the snow continued to fall, it became ever more difficult for the plows and spreaders to throw the snow over the tops of the increasingly higher snow banks along the track.  Eventually, the snow that the plow threw up the bank slid back onto the tracks as the caboose passed.

Trains following the plow tried valiantly to keep moving up the steep grades, pushing through snow and ice. Far too soon, the pipes that delivered dried sand to the rails in front of the driving wheels became plugged with snow, stopping the flow of sand.

Well aware of this, we had spent nearly an hour using hammers, pipe wrenches, fusees and lengths of wire coat hangers to clear all of the sand pipes on every engine in our consist before we left Blue River.

The plow train is running ahead of us and has a thirty-five minute head start. 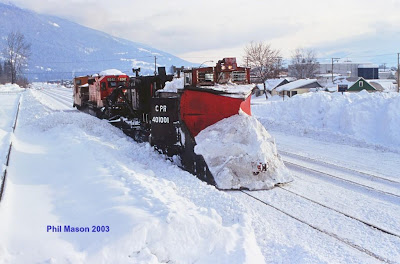 All is ready and we pull ahead slowly while the tail end crew does a run-by inspection of the train.  Once they're on, the throttle is opened up and the exhaust stacks bark with the determination of a dog-sled team leaning into their load.  We leave Blue River behind us as we head east, and home. 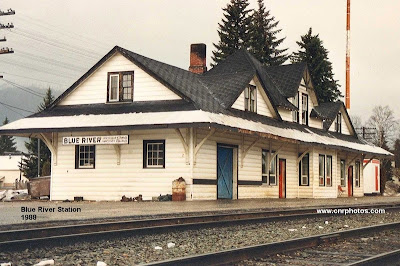 Roaring through Red Sand and Thunder River, we throw ourselves at the steep grade ahead.  As we begin our ascent, the staccato barking of the exhaust changes its tone, the high pitch of steel wheels running on steel rails changes its song, lowering its voice to match the low groan of the big diesel engine behind the electrical cabinet at the back of the cab.

Now we wait while the locomotive does it's work.   I pour my first cup of hot coffee, cream and sugar from my Thermos bottle.  The engineer takes a half-smoked cigar from a pocket in his over-all bib where the gold chain is attached to his pocket watch and to a button hole in the bib.  Clenching the cigar between his teeth, he strikes a wooden match against the control stand and lights the remnants of his cigar. 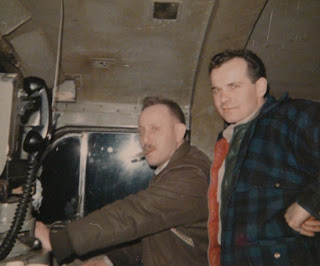 Opening the window and listening to the sound of the wheels on the rails, I can hear the driving wheels slip and chatter as they fight to maintain their grip on the snow covered rail head.  Inside the cab, a white light flashes brightly in front of the engineer.  Every time one of the locomotives wheels slip, the 'wheel slip' warning light flashes 60 watts of light into the engineers eyes.  The engineer pulls a paper cup from the holder beside the water bucket.  He carefully pulls at it, spreading it out on his lap as the cup's folds yield to his efforts.  In no time, he has flattened the cup into a white, waxed paper disc.   He pushes the round paper into the recess in the control stand dash board in front of him.  We know the wheels are slipping, so there's no need for the continuously flashing warning light in the cab.  The sanders are left on, despite the wheel slip warnings.  Perhaps one or more of the sanders on trailing units are not yet plugged.  We have to keep the train moving; to stop in this area might mean not being able to re-start it on the hill.  It occurs to us that we might have to "double the hill" if we stall before reaching the crest at Albreda.

The speedometer is dropping, just a little.  Snow on the rails, blocked sanders and a tonnage train were taking their toll on our progress.  The speedometer needle settles in, bouncing between 8 and 10 miles per hour.  The radio crackles with the conductor's voice.  He's been thinking the same thing as we have..., will we have to double the hill?  If we stall, the tail end brakeman will have to go flagging in accordance with Rule 99; handbrakes will have to be set on the tail end portion of the train to hold it in place while the engineer and I take thirty or forty cars up to Albreda, leave them secured in the siding and return for the remainder of the train. This could necessitate a change in our train order authority and would result in a serious delay to our train and any others that would be on the subdivision, whether moving eastward or westward. 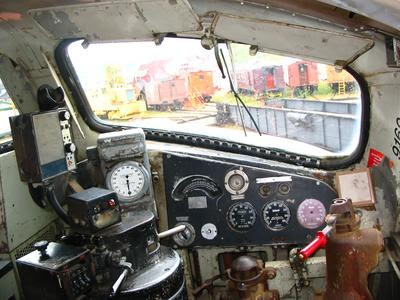 I believe this photo is of an ex-CNR F7A in Prince George's railway museum.

We told him that we were holding at 8 mph and would let him know the minute that a change was noted.  I think he breathed a sigh of relief, simultaneously with us.

Night was falling, and the temperature was dropping.  The rails grew colder, and as they did, they became drier.  The wheel slip light did not flash as frequently as it had.  The speedometer picked up a couple of miles per hour.  The conductor called saying, "That feels better"!

The rail gods were smiling on us, and we knew it.

Soon, the engine rattled over the spring switch at the west end of Albreda siding.  The speedometer continued to climb.  The little white station building came into view and, above it the semaphore train order signal stood erect, displaying a bright green light against a clearing winter sky.

Picking up the radio handset from its cradle, I pressed the mike button and called out..."Clear board Albreda!" 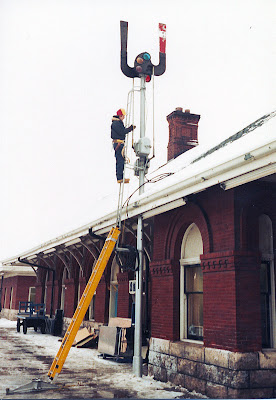 Photographer unknown.  Photo depicts a typical train order board that was used to inform crews on trains of the presence of updated train orders, or instructions governing the movement of their train relative to other trains operating in their territory or on their subdivision.

With the speedometer now passing 25 miles per hour, he notches the throttle down a bit and taking the automatic brake valve in his hand, he makes a reduction in brake pipe pressure to activate the train's brakes.  We're tipping over the top of the hill to begin our descent from Albreda to Cedarside and Valemount.

The worst of the trip now seemed to be behind us.  The snow wouldn't be quite as deep on the hill between Jackman and Red Pass, and from Red Pass to Jasper, it would be pretty easy going, being relatively flat or, at worst, a few miles of gentle descending grade from the Yellowhead Pass, where water flows both east and west, to Jasper.

As our engines clattered and rumbled across the steel bridge over the headwaters of the Fraser River, another "clear board" welcomed us at Red Pass.  Like Albreda and Valemount, the train order office was darkened.  The only light in the darkness was the green light on the semaphore signal.

One more train order board to go....at Lucerne, and we'd be home free for our final run to Jasper.

With the train order board at Lucerne bearing "green", now several miles behind us, the engineer called the yardmaster at Jasper for instructions.

"Yard your train in track three", he said.  "And put your power to the shop...if you can find room for it!"

There was just one clear track left in the yard when we arrived and it had been kept that way in anticipation of our arrival.  We were the last train on the road, and once we had tucked it away, put the power to the shop track and delivered the bills to the office.... everybody was going home; in time for dinner, family and friends.

It was Christmas Eve.
Posted by Bruce at 4:26 PM