Bill was a hogger for CP when I met him.  He introduced himself as "Scrap Iron".
Scrap Iron didn't brag about it, but he knew the exact mileage of every drawbar and knuckle that had broken under his throttle hand; the benchmark of a locomotive engineer's prowess being the number of knuckles and drawbars he or she added to their un-official record. The object was, of course, to acquire as few as possible. Yes, even I have a couple to my credit.
A testament to his unforgettable character is that I still remember working with him in the mid '70's while CN and CP were sharing track during a major traffic disruption.  CN was detouring over CP track for a number of months while the was being re-built after being struck by a runaway barge during a very thick fog on the morning of December 26, 1975.
Do you have a few minutes for a 'short story' about that fateful morning? Yes??!!

OK...here we go then.
In December of 1975, I was an engineer working a midnight yard job in Port Mann (Thornton Yard). Like nearly all assigned jobs in the terminal, the 2400 West Lead had been cancelled for Christmas and Boxing Day. However, CN's westbound speed train, 217 arrived at Port Mann after midnight and CN decided that they wanted it taken to . The only engineer in the terminal who answered the call was yours truly...(the kids needed new shoes). We were ordered for 0530 with the caboose still on the cab track and engine on the shop track. The property seemed to have been abandoned as there was not a soul to be found. There were written instructions pinned to our orders and clearance outlining the engine numbers, caboose number, track number, pick up and set out, etc. The shop buildings were dark, the control tower was empty and there were no Carmen on duty.
Seemingly to set the tone of the day, our conductor had been pulled from an all-night party and was carried, protesting, aboard the caboose and put to bed on the cot before we were even off the shops.
In the dark, the head-end brakeman and I got the power and the caboose to the yard with the power, found the train and got the switching done. The ever-present marine fog began to thicken as we pulled the train from the yard track and onto switching pullback no. 4 for the air test. There were no Carmen on duty, so the head-end brakeman performed a number two brake test and I called the and the BN dispatcher for permission to leave Port Mann.


Photo Credit  Andy Cassidy
Both said that we could leave and when the brakeman climbed up into the cab, I whistled off and began to pull. We didn’t have much of a train...perhaps 40 cars and two SD40-2's. We called the conductor, but didn't get a response and we hoped that he had stayed where he was when the air test had been completed.
The fog deepened as we climbed up onto the and it was thick enough that I had to extinguish the headlights and ditch lights to see the Interlocking signals on the bridge. 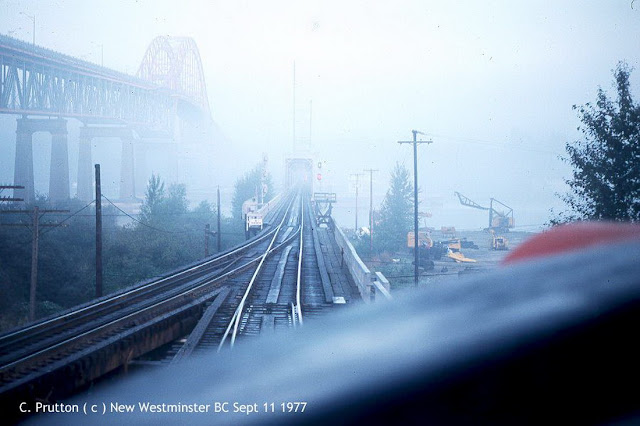 When the train was just past the middle of the span and the engine entering the curve near the old cannery, the bridge tender/operator called us on the radio. There was tenseness to his voice as he told us that he could see the superstructure of a large barge above the fog moving toward the bridge. Thinking that it was under the control of a tug, he called on the marine radio channel, but got no response. Then he told me to "get that train off the bridge" as fast as I could, because it was obvious to him that we were about to get hit by a runaway barge. At that time, there was a permanent 5 mph slow order on the old bridge, but this was an emergent situation and required a controlled response. I began to open the throttle as the head-end brakeman started calling the conductor to ensure that he was aware of what was coming. After all, we knew the engine was going to make it, but because of the heavy fog, we couldn't tell how close the barge might be to the bridge and, if it was really close, the caboose might still be on the span when the collision occurred. There was no response to our calls. 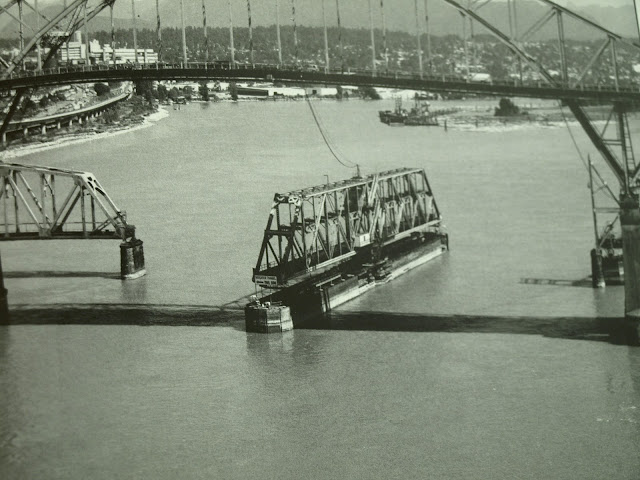 With the head end of the train off the bridge and descending the steep grade off the approach bents, and the train speed now approaching 20 miles per hour, the conductor's shaky voice boomed from the radio speaker and filled the cab with ... "HARVEY....SLOW THIS #@*"&^ TRAIN DOWN OR I'M GONNA PULL THE *&#$%^ AIR!!!!"  If that happened, we'd stop in less than an engine length with the caboose sitting on the swing span.  Not a good end to the conductor's day.
On the head end, we looked at each other and I handed the radio handset to the brakeman. "You'd better talk him down off his windmill, or he's going swimming!", I said. Only when Glen Cadno, the bridge operator intervened, did the conductor get off the radio and climb into the cupola to watch the whole thing take place.
I had a light brake on the train and was pulling in the sixth notch to keep the train stretched and secure on the tight curve coming off the bridge.  With the exception of the sound of the diesels and the chirping of brakes on wheels and squealing flanges on rails, all was hushed in the early morning fog. 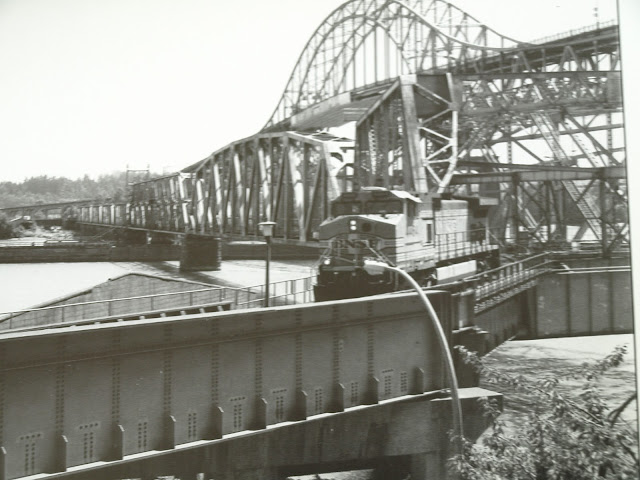 Photo Courtesy Barrie Sanford
he conductor called to say that the caboose was off the swing span, so I released the train brakes and reduce the throttle by one or two notches.
The bridge was struck by the barge, Swiftsure Prince and the was wrecked and remained out of service for months. 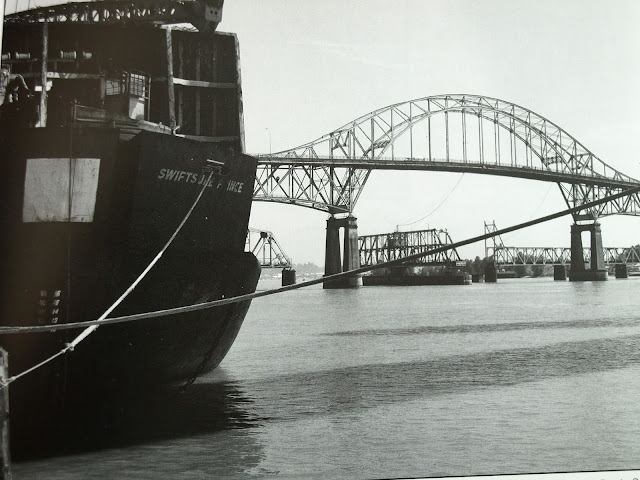 Photo credit - Barrie Sanford
CN trains were detoured over CP  between Coquitlam, Sapperton and Mission, and many train and engine crews made a lot of 'overtime' money in the process. Young engineer Bruce Harvey made the leap from the junior assigned hogger, working the 2400 West Lead (a really shitty job), to the engineer's spareboard..."the money machine". At the same time, CP experienced shortages of crews as they had to provide 'pilots' for all the CN trains detouring over their track.  And Bill, who was no stranger to high mileage jobs, was one of those pilots handling our trains over his track.  We spent many hours together sitting on CP track waiting for clearance to get through Coquitlam and onward to Sapperton.

And that's how I met "Scrap Iron".

AN ADDENDUM TO THIS STORY  MAY 23, 2012
Photos and notes by Claude Prutton

Note:   Your will read, in almost every account of this disastrous event that the barge, The Swiftsure Prince was blown from its moorings at Pacific Coast Terminals by a strong wind.  I can assure you that while it might be reasonable to assume that 'wind' was the culprit, I can assure you that was an unlikely scenario.

In fact, the air was calm at the time the barge slipped from its moorings and it was the incoming tide that carried the barge into the New Westminster Rail Bridge and not the wind, for there was no wind blowing.

There were only four people on the bridge at the time of the incident; the bridge operator; Benny, the conductor; Cecil, the head end brakeman and myself, the engineer.

At the time, there was a very thick blanket of dense fog lying at a depth of approximately thirty feet.  Above that, the air was clear and and the bridge operator could see the superstructure of the vessel as it was coming upriver, towards the span and he was able to warn us of the approach in time to get the train off the doomed span.


The following is from an email that I recently received from Claude Prutton, via Mark Forseille.

To say the least, I am extremely grateful to Mark, for taking the initiative to forward Claude's email to me, and especially to Claude (for taking the attached photos).

Caboose Coffee and its readers are all the richer for their efforts.


Here are some Oldies of a different sort. The pictures depict probably the worst disruption of Rail traffic the lower mainland has ever endured.
On Dec. 26th 1975 a log barge broke loose from it's moorings at Pacific Coast Terminals during a strong windstorm & blew up stream smashing out the main fixed span on the New Westminster Railway Bridge. This caused a major disruption .r CN, BN & BC Hydro, Railways. 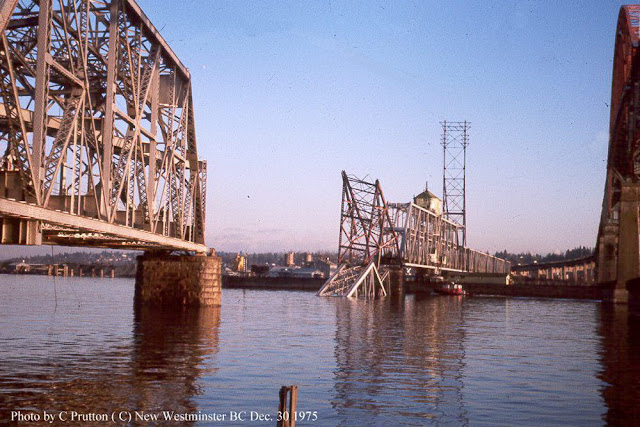 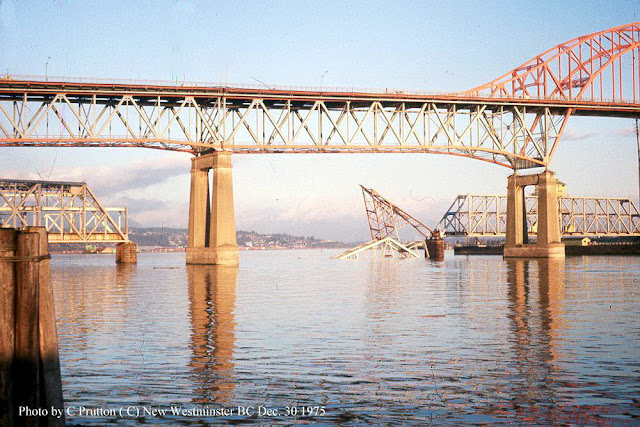 CN had to divert westbound traffic destined for North Vancouver over the Tete Jaune & Fraser Subs to Prince George & then down the BCR to North Vancouver. Local transfers into Vancouver went East to Mission & then onto the Mission Bridge & then down CP's Cascade sub to the Sapperton Interchange & then from there on to BN's 4th sub into Vancouver.
BN for the most part entered Vancouver by using their Sumas Sub to Huntington & then CP's Mission Bridge & then on to Vancouver from there.
BC Hydro used the same route to get to their New Westminster Yards & Shops. They had a long trip however to service the industries across the river a distance of about half a mile required a trip of about 70 or so miles out to Mission & back on the opposite side of the river..
With in a short time after the accident Plans were drawn up & a new section was constructed on the south side of the Fraser River. By Mid April 1976 the new span was ready for installation. A couple of barges were ;placed under the span at the start of the Flood tide & once the structure was off it's piers the barges were towed over to the bridge & the span lowered on the Ebb tide. 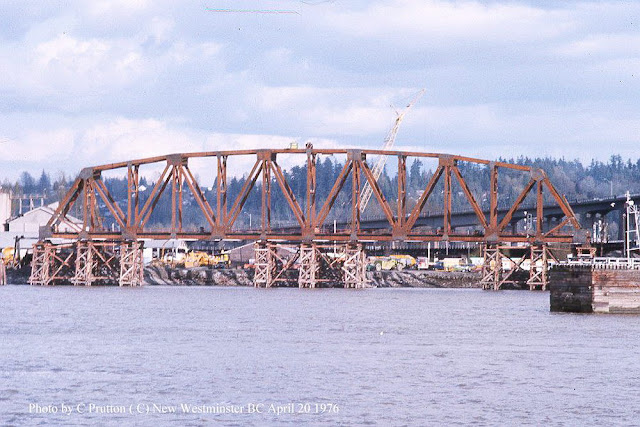 To me that sounds like incredible precision. It went off without a hitch . 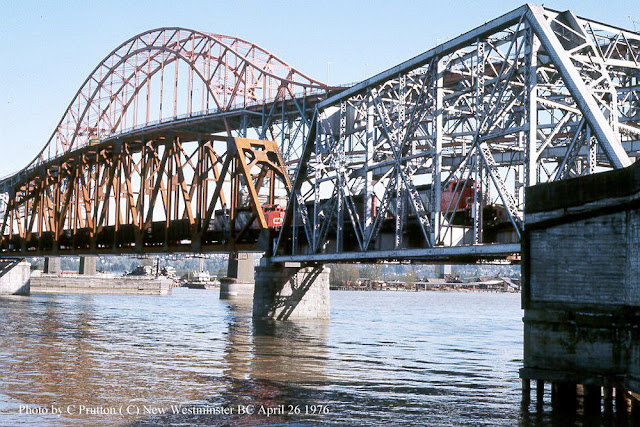