In a previous blog, I made reference to large rocks that hang above the tracks in treacherous areas of railroad country. The following pictures will give you an idea of just how bad it can get.

The text below is from the initial (unofficial) report I received:

Initially (on Saturday), this slide was reported as being 40 x 80 feet.  Now that they have been able to get a better look at it, here is an update...

Wiped out the slide shed, 500 feet of track, 1/2 a bridge and almost made the Fraser River a lake.   30,000 cubic meters of debris, not counting 3 blasts needed to knock off overhanging nubs.


If you look closely, you will see a large, rubber-tired loader working on the scree at the edge of the slide.  Also, there is a large excavator on the right of way at the right hand edge of the photo.

You can also see the slide detector fence posts and arms (in photo number two) that give warning to approaching trains when a falling rock breaks one or more of the wires that are strung along the face of the cliff beside the track.

Cut from an email, we have Butch Whiteman's comments, below....

I've seen a few slides between Jasper and Vancouver in my time, but this is as big as I've ever seen.  It came down last Saturday and they finally got track passable this morning (Thursday).  I recall my Granddad telling me a story about slides that came down in this area during the winter of 1933 when he was called for a work train west out of Kamloops to clean it up.  Of course, they didn't have the equipment they have today to deal with slides like these, but it must have been a big one too as they were gone from home for 33 days!  While they were ditching, a slide came down on top of them - burying the engine but they were able to dig themselves out of it before suffocating.  The only casualty in that slide was the watchman they had posted on an outcropping who's job it was to warn the others if a slide came down.  He gave a warning and workers were able to dive under cars on the train to escape the rocks, but the slide took him into the river and he was never found.


Jackass Mtn. is the name of Mountain where this occured.  Because of the terrain in this particular area, the road goes up quite high to get over the "prone to slide" area and a Jackass that was used as mule to haul supplies up the canyon finally got tired of hauling heavy loads and just gave up...... he simply committed suicide and stepped off the trail into no-man's land.

And they tell us that 'crab fishing' is a dangerous job!!! 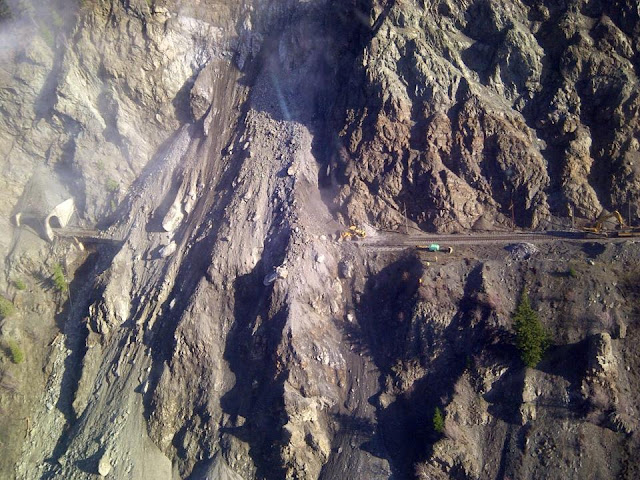 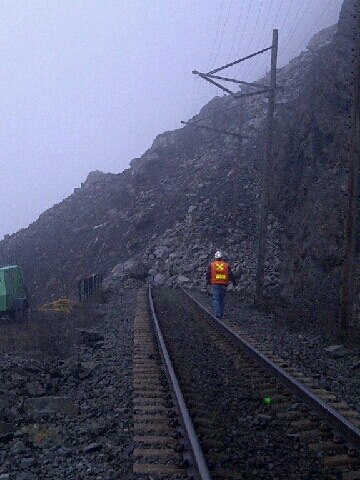 Photos submitted by Butch Whiteman, who spent many years of his railroad career working this subdivision, as did his father and his grandfather before him.
Photographer not yet known 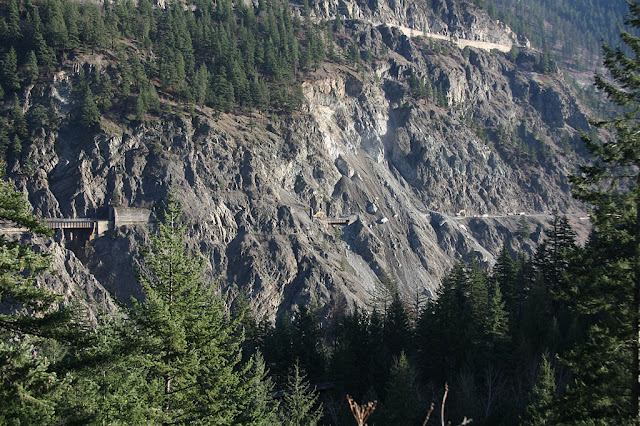 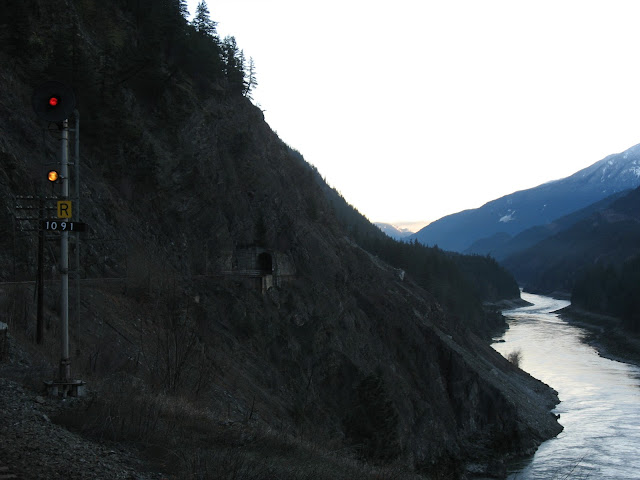 This photo was taken looking west, just east of the tunnel and rock slide.  The single aspect CTC signal at the left side of the photo would normally indicate stop, then proceed at restricted speed; however, the presence of the yellow sign with the capital letter R on it allows trains to pass the red signal without stopping, but must proceed at restricted speed.
The 'white' signal below the red one is known as a "T" light, which is activated when one or more of the wires in the slide detector fence (west of the tunnel) is broken by a falling rock. 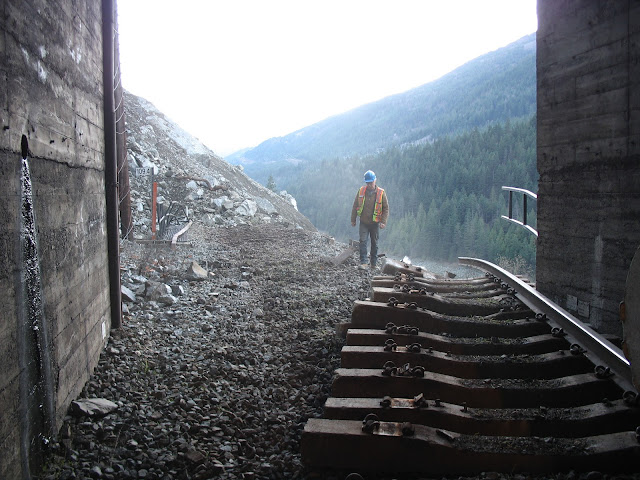 March 19, 1966 just a few miles west of the big slide we've been following.
Thanks to the unknown photographer for his/her photos used in this blog.
CN's website says the following about it...
- On Saturday, November 24th, a rockslide occurred along the Ashcroft subdivision of the CN main line near the station of Falls Creek, BC. The incident, which was reported on November 24th at 1210hrs PDT, caused delays to our mainline trains running between Kamloops, BC and Vancouver
- The site was cleared as of 1020hrs PST on Thursday, November 29th. Customers should expect some delays as service through the area gradually returns to normal.

I would like to extend my most earnest gratitude to all those who have allowed Caboose Coffee to publish their photographs in this blog.  Special thanks go to Butch Whiteman for sharing his connection and for having a sincere interest in this blog as a tool to give others an insight into life on the railroad in a time when the technology was evolving from steam to diesel, from train orders to CTC, MBS and OCS.﻿  Train dispatchers came to work to find that they were now RTC's and train masters were no longer respected from above or below.
﻿
Posted by Bruce at 11:42 PM