With all the recent news coverage of oil pipelines, the threat of an oil tanker disaster on British Columbia's coast, and discussions around the movement of oil by rail, I was wondering how I might tie all of the above together in a story that would have a 'railroad' flavour.  Then..., along came Claude Prutton who sent me an email with some of his photos attached that gave me an idea.

Claude is a long-time resident of the Greater Vancouver area and has been hanging around the railroad properties and catching rides with obliging railroaders for many years.  Fortunately for you and me, Claude has also been taking photographs of railway life, not so much from the familiar 3/4 frontal roster-shot view, but instead, he's looked for the unusual shots.  Claude, like Andy Cassidy, Ray Farand and others searches out the photos that tell a story, or in the case of Caboose Coffee..., help me tell a story.

In this story, I feature the photos that Claude included in his recent email because they do tell a story.  As well, I'll add a few more that I've collected, so that I can create in your mind's eye, the total scene and a more complete rendition of the tale.

I'll fill in some of the details that surround the key player, (an oil tanker), perhaps providing some insight into a little known venture that almost came to pass as a result of the mis-adventure of the oil tanker featured herein.

In previous blog entries, I've told you stories of my railroad experiences with a few of the bridges that cross the Fraser River between Red Pass Junction and the salt water of the Salish Sea (formerly known as the Strait of Georgia).  This week's story is about another railway bridge, but this time it's one that spans Burrard Inlet which separates the City of Vancouver from the City and Districts of North Vancouver et al.

In order to move products such as potash, sulphur, grain, chemicals and forest products to and from these facilities and the southern terminus of the British Columbia Railway, a functional, economical route had to be found.  In 1967, work was begun on a two mile tunnel under Burnaby Mountain from the Burlington Northern/Great Northern mainline in Burnaby, to a point above the south shore of Burrard Inlet. 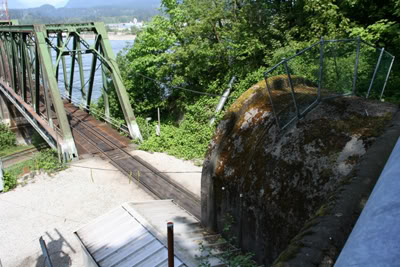 From this point, a new lift span was built to carry CN's trains across the inlet and into the North Shore Industrial area known as Lynn Creek.

The Grand Opening of the new tunnel and bridge was delayed for some time while two arms of the same union fought a 'down and dirty' battle to decide whether the trains running to and from the North Shore would be manned by Conductors and Trainmen, or Yard Formen and Switchmen.

After a great many meetings involving officers of the company, the unions and the lawyers, an agreement was hammered out in the Biltmore Hotel and became known as the Biltmore Agreement.

I won't belabour you with a lot of details, but the short version is that the Conductors and Trainmen lost 16 miles and several hours pay off each one-way trip as a result of having their originating and terminating terminal moved from Vancouver to Surrey, on the south side of the Fraser River.  This was not without significant compensation for most of the men whose lives were affected by this move.

The Yard Foremen and Switchmen were chosen to handle the traffic to the North Shore and the Conductors and Trainmen kept to the mainline between Port Mann and Boston Bar.  The Engineers, of course were the big winners, as they got to work in all the zones.

When the dust settled, CN opted to conduct an inspection of the tunnel, track and roadbed, as it had sat unused for many months while the labour troubles were being sorted out.  On entering the tunnel's south end, it was discovered that a significant number of transients, or "hippies" had moved into the tunnel and had created a squatters village in the dark, cavernous bore-hole.  It took a court injunction to remove the squatters.  In 1969, the CNR opened it's new access to the North Shore of Burrard Inlet and the bulk commodity facilities there by running a short train of potash from the BN track at Willingdon, into the tunnel and across the bridge to Lynn Creek. 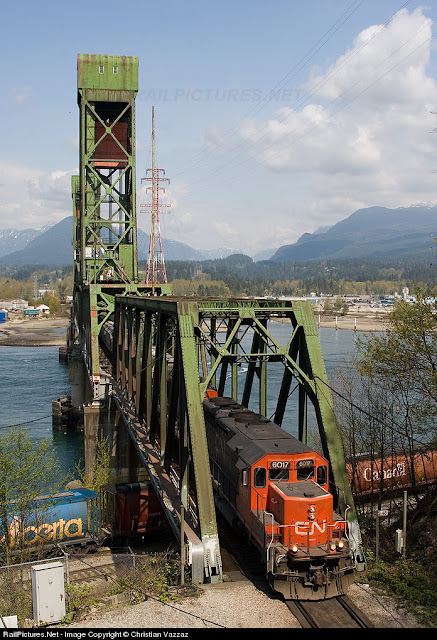 In order to fall within reasonable gradients and curvature requirements, and taking into account the topographical challenges and opportunities afforded to the engineers, the route placed the north end of the tunnel at the narrowest part of Burrard Inlet.  This was an advantage when laying out the footings for the bridge piers as well as providing access to the east end of the CN yard, but it did present challenges to Marine Traffic.  Hooker Chemicals had a large facility on the north shore, immediately east of the bridge approaches and the Trans Canada oil Pipeline (Kinder Morgan) had it's western terminus on the south shore of the inlet, a short distance east of the bridge.  Tides run at a prodigious rate through both First and Second Narrows in the Inlet and can reach nearly 6 knots.

The above photo, taken by Andy Cassidy gives us a really good overview of the relationship between rail and marine traffic at the Second Narrows crossing of Burrard Inlet on BC's south coast.  Andy was standing just west of, and above the mouth of the Thornton Tunnel which runs beneath Burnaby Mountain.  The far shore in the photo is the north shore.   Note: CP's mainline from Coquitlam to Vancouver beneath the south end of the CN bridge.

Train movements within the tunnel and over the bridge are controlled by the Second Narrows Operator who, by law had to favour marine traffic over rail traffic because of the narrow channel, fast currents and the inability to steer a ship once it has lost it "way", or speed over the ground below.  In effect, a ship, like a shark, must keep moving or it becomes helpless.

While the Fraser River (New Westminster) rail bridge had been having the lion's share of encounters with marine traffic, the Second Narrows bridge had been operating relatively trouble-free...., until one day, during a heavy fog..... 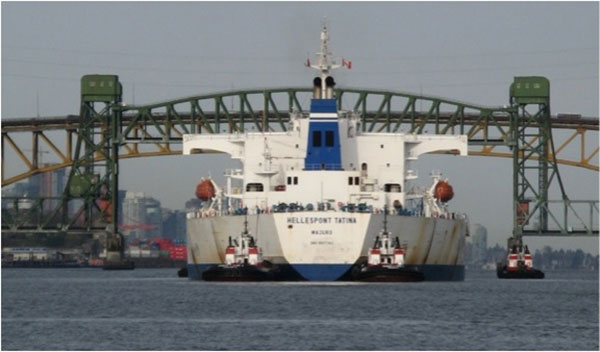 ﻿
Photo courtesy Google pics
In the photo above, it would appear that it'll be a real tight squeeze when the ship passes below the bridge, and in reality it is; just not as tight as it looks.   The distance between the lift span piers is 1000 feet and the MV Japan Erika was 500 feet in width.  With just 250 feet on either side, and the bottom of the hull clearing the bottom by only a few meters, it's a tight squeeze all 'round.
﻿
The MV Japan Erika, which had filled it's holds with Alberta crude oil bound for the orient collided with the north pier of the Second Narrows lift span, disrupting rail traffic for months. 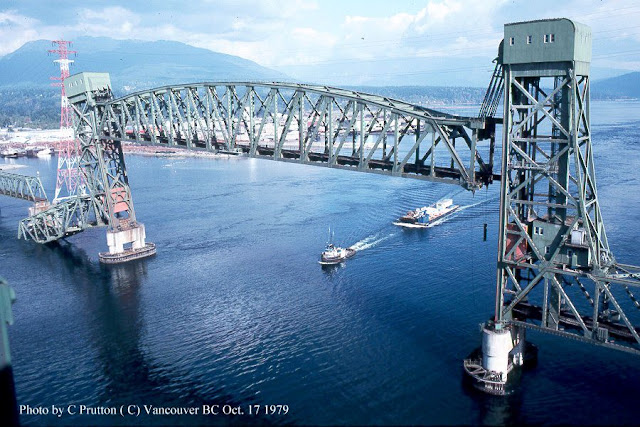 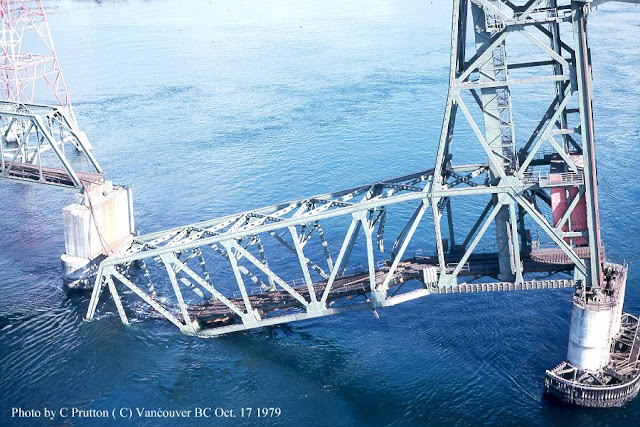 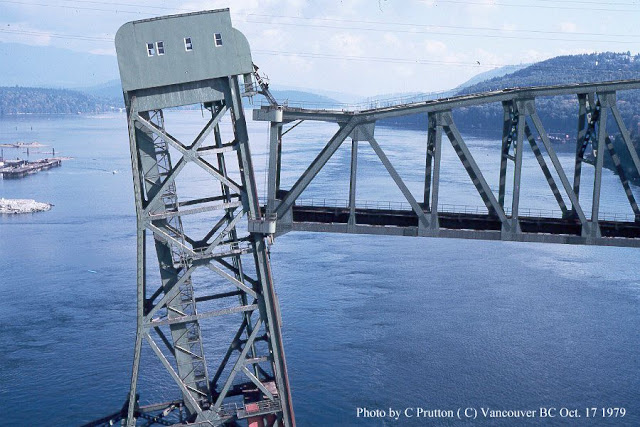 On December 12 1999, the Erika broke in two and sank in Biscayne Bay, off the coast of Brittany (France) taking with her nearly 31000 metric tons of fuel oil.  The sinking was the worst maritime disaster in the country's history. 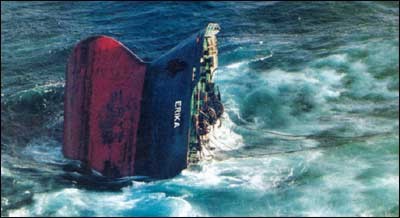 Photo courtesy Google Images
In an effort to help ensure that a similar incident might be avoided in the future, a number of rules followed the Second Narrows Bridge collision.
Notably, all freighter traffic must have a pilot onboard (The MV Japan Erika had a pilot), and all freighter traffic must be accompanied by tugs to help control the movement beneath the bridge.
In addition, funds were allocated to try to establish a system of navigation lights that could be used by large ocean-going vessels approaching and passing under the Second Narrows lift span.
The plan that garnered the most attention was one that would have 'pods' anchored to the bottom of the Inlet in a pattern that might resemble a funnel with the narrow ends closest to the piers and widest ends some distance east and west of the piers.
The idea behind these pods would be activated by the bridge operator when the bridge had been raised for the passage of a ship.    The pods that were farthest from the bridge would "flash" at a regular frequency of perhaps once every five seconds.  The next pair of pods..., one on either side of the approaching ship would flash regularly at a rate of perhaps once every four seconds, and so on.
In addition to the consecutive pods flashing at a quicker rate as they got closer to the bridge, they were also positioned closer together, so that when viewed from the deck of the ship, they seemed to herd the ship to the center of the channel.
In the event of very restricted visibility, say when a dense fog has settled over the inlet, the flashing lights would be easily seen, the frequency of the flashes easily counted and the spacing would easily tell the Captain and the Pilot of their exact position relative to the bridge structure.
The pods were built and tested in currents that would approximate those found in the waters where the pods would be situated.  Everything looked good.
However, when it came time to anchor the lights to their chosen locations, Mother Nature stepped in with a nasty curve.  The currents near the bottom of the inlet in the narrows is approximately double that of the currents nearer the surface.  This phenomenom occurs at peak flows during major tide changes.  The stronger currents made it extremely difficult, if not impossible to place and anchor the lights in place.
The plan was shelved.
﻿
﻿
Posted by Bruce at 9:34 PM