After several weeks of putting out inquiries for photos and information on CN's Express Trains of the sixties, and receiving only bits of information describing notes from a few former CN employees regarding their trips on those trains, my quest for the grail began to wither on the vine.


It seemed very strange to me that these trains should have been missed by the many railroad photographers who had been staked out along many hundreds of miles of railway right of way.

They may have had different train numbers, or designations such as 104, or 2nd No. 1, or perhaps they just ran as extras when westbound or perhaps were dispatched on a freight schedule from the timetable when running eastbound.


The express trains seemed to have faded into the shadows of time and those unique trains, sometimes referred to as "the hotshot", "the bullet," or "the speed" that several of us recall so fondly were gone without a trace.


Well, you know what they say..., "when you stop looking for something, that's when it will show up."

Levina Shaw, of Coquitlam, BC contacted me with the name of a man who had worked at Redpass Junction for a while in the late 50's and early 60's.  She said that a story that I had written in this blog about being given an Oral Examination of the 1962 Uniform Code of Operating Rules in unique circumstances prompted her to get in touch with a friend of hers who had spent a few years at Redpass.


Lavina contacted Bill Atkinson and gave him Caboose Coffee's internet address and the introduction was made.

Bill had only worked at CN for a relatively short period of time, but that left an indelible imprint on him.

When he left CN for a career with Greyhound Bus Lines, he took with him the memories of several years of living alongside the track and working in stations, copying orders, and delivering them to passing trains.


I found his story to be warm and alive, even after all these years away from the railroad.  I encouraged him to give me more information so that I might share it in a story for you to read.  Bill's story will be published in Caboose Coffee next month, but in the meantime...., Bill had been cleaning out some boxes that had been stored in his spare room and he began to discover artifacts from his time with CN.  He thought that I might appreciate some of the artifacts that he had saved from his time as an Operator.


Perhaps there would be something in the package that might shed a little light on the express trains that surely would have been running during the period that Bill worked on the Albreda Sub.

I checked my mailbox every day and finally, a sturdy Canada Post envelope arrived from Bill.  I cleared a space on my desk and took a pen knife from the drawer.

Inside the envelope, I found four time tables; 1955, 1957, 1960 and 1962.  I also found a stack of train orders dated between 1937 and 1968. Some of these were CN, some CP and the rest hailed from nearly every railroad in North America.  These had been Bill's collection, acquired by trading with other operators across the continent.

Bill had also found some photographs, which he scanned and sent to me.

Thanks to a few of these train orders, some quotations from emails I've received from former railroaders, and a photograph or two, I was able to piece together a decent snap shot of some train movements that I know some of you will be interested in.

One of the train order sets caught my eye almost immediately.  The "Clearance" read..., 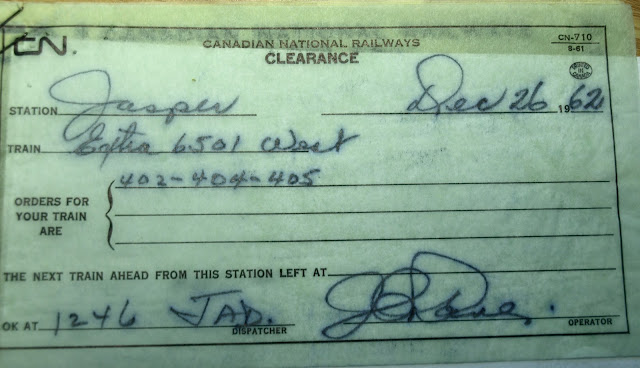 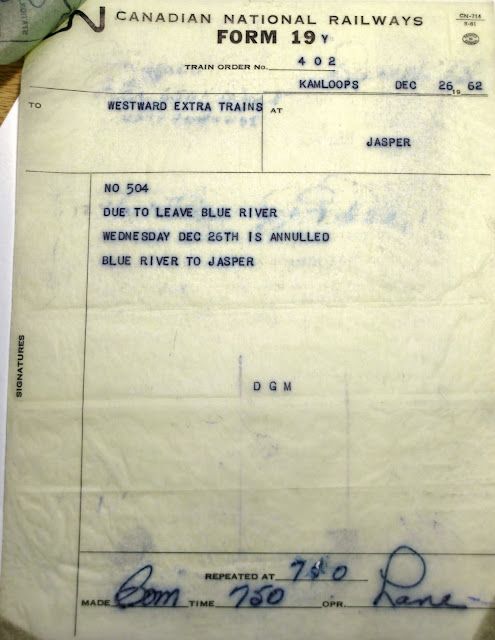 Order number 404 advises the Extra West that it may run at permissable timetable speeds for passenger trains except as noted in the order. 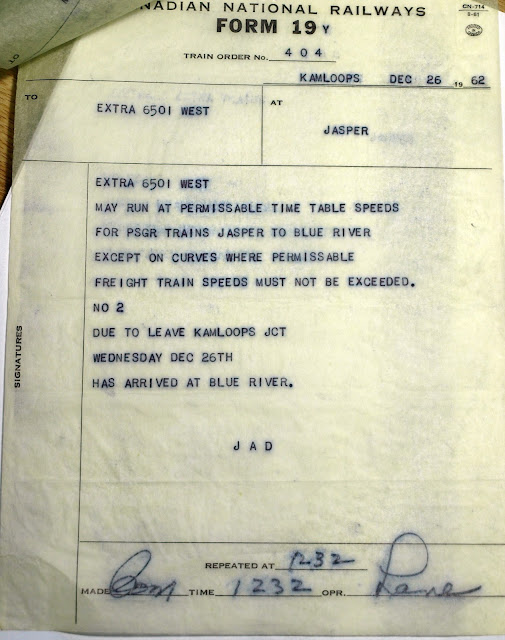 The coins were beginning to drop! 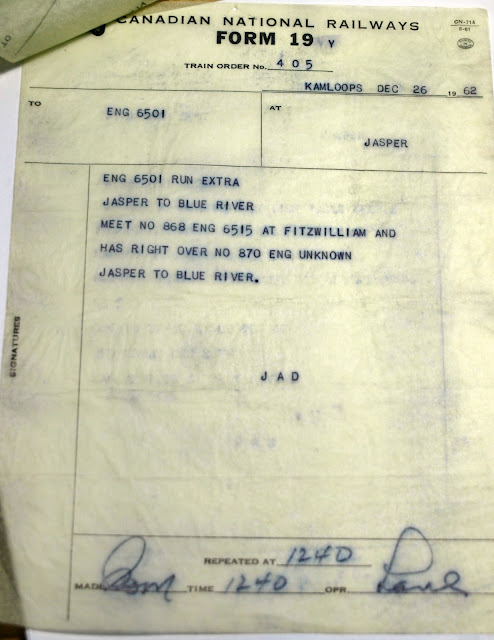 Engine 6501's running order, a Form G train order gave the engine authority to use the main track between Jasper and Blue River on December 26, 1962.

Order number 405 also stated that Extra 6501 West was to meet Number 868, an eastbound train running on a freight schedule, at Fitzwilliam, and it has right over No. 870, another freight schedule from Jasper to Blue River.

Leaning back in my chair, I re-read the orders and visualized the circumstances surrounding the movement of these trains.

Both the westbound and the eastbound were being pulled by passenger locomotives and, in all likelihood, neither of these trains were passenger trains.  They had to be special freight trains, otherwise known as.... Express Trains!!!

Then I noticed the small CN form attached to the back of the orders.  It was the Train Register Check that all conductors filled out and attached to both copies of the train orders..., one for the engineer and one for himself.

The Train Register Check, as seen below shows pertinent information about superior trains which have arrived, or are due on the subdivision, but have not yet arrived.

It also shows, for the benefit of the engineer, the number of loads and empties on the train as well as the tonnage he'll be pulling.

In the case of the Extra 6501 West, Conductor Gristwood has noted the names of the engineer, Doug Brown and fireman, Metro Yakiwchuk.(sp)  The cars and tons and the numbers of all the units in the locomotive consist. 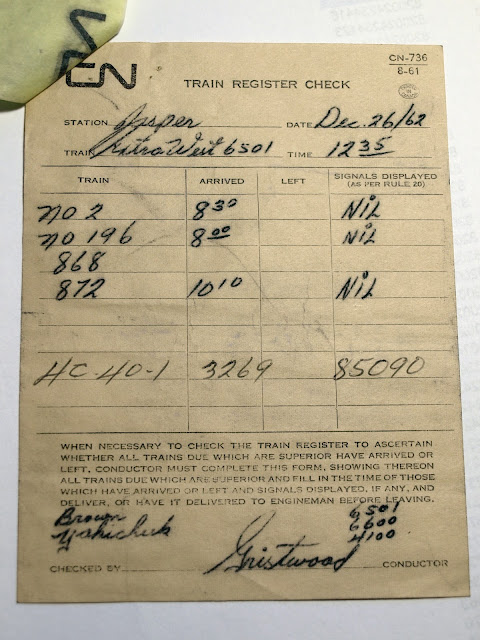 All three of the locomotives in the engine consist are geared for high speed operation and were customarily used on passenger trains, or other high speed traffic.  The 6600 is an EMD "B" unit and the 4100 is an EMD GP9.

Digging deeper into the stack of train orders that Bill had sent to me, I found more orders and clearances addressed similarly.

There were more..., enough to suggest that in the winter of 1962-63 there were express trains running wild in CN's Mountain Region.

How about photographs of these trains?  Well, I found one of my own shots, taken of a westbound express train about a mile east of Jasper.  It's not clear, but for an old Kodak Instamatic, I'm grateful for small treasures. 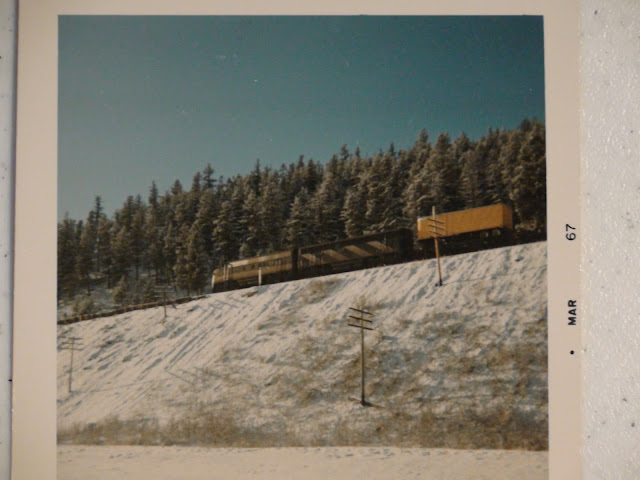 Next, is a photo submitted by Bill Atkinson of Calgary.  Bill took this photo at Redpass Junction while he was stationed there.  He thinks it was circa 1962. 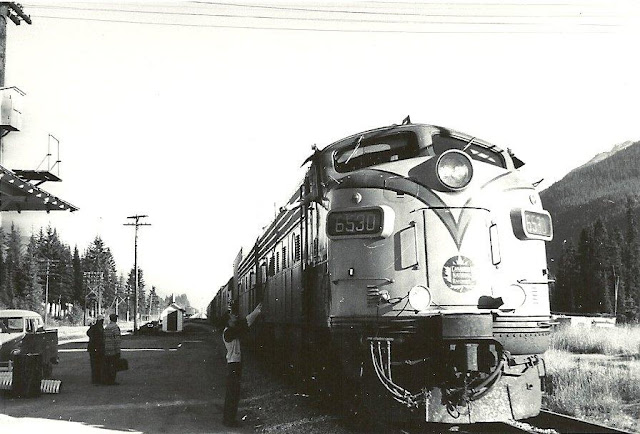 Note, if you can, the train consist behind the engine.  There is a trailer on a flat car, then a baggage car or two.

Thank you Bill.  This is a 'Classic' photograph!


One of our astute readers commented via email that one of the reasons that passenger locomotives were used on these trains was to take advantage of the steam generators that each of this class of locomotive was equipped with.  Some shipments would require heat to prevent freezing en-route, and if that was the case, a passenger locomotive would be supplied.
Posted by Bruce at 6:38 PM

Email ThisBlogThis!Share to TwitterShare to FacebookShare to Pinterest
Labels: Experimenting with high speed express in the mountains, getting there on time

Hi Bruce.
The psgr engs were not only for speed but some of the various cars had steam from the engines, for perishable traffic.

You raise a very good point. Now that you mention it, I can recall that when working the head end of those trains, I would press a button on the "dash board" of the locomotive, FP9A or FPA4, to blow down the separator in the steam generator.

The use of high-speed engines on the Mountain region didn't make much sense if their use was just for speed. West of Jasper, there were few places where we could 'let 'er ride' in the eighth notch and go beyond the magical "65 mph" marker. Therefore, any freight engine, even the SW1200RS, could pull a train at 65 miles an hours.

Thanks for bringing that point to my attention.