Living the dream - A little boy's adventure on a freight train. 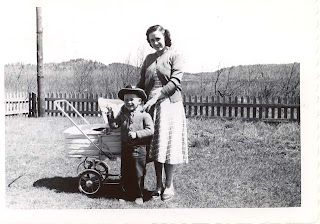 My mom dumped a dollop of boiled, mashed, watery turnips on my plate beside the peas, carrots and sausages, and set it on the table in front of me. I began to pick at the peas and carrots. And there was no doubt that I would eat the sausages that were on the plate, but ...no matter how much butter, salt, pepper or gravy you can put on turnips, they are not designed to be swallowed by most 8 year old boys.

I made a stand, refusing to eat the turnips. Mom held her ground. She pointed out that there were kids somewhere in the world who would love to have turnips to eat. I told her that if she wrapped up my turnips and put a postage stamp on the package, I'd be happy to take them to the post office and mail them away.

So, I announced that I was leaving home. Mom said that was OK, but I would have to dress warmly, pack my toothbrush and take a sandwich in case I got hungry.

"Fair enough", I said, and went to my room to pack my knapsack while Mom made me a sandwich. Soon I was ready and, in a huff, off I went with my knapsack over my shoulder.

Without any idea where I was going, but knowing that I would have to make a plan, I walked downtown, ending up on the railway station platform. The sign on the station said, CAPREOL and "Brent, 145 miles"; "Foleyet, 148 miles".

I knew my way to Brent, having made the trip, accompanying my dad on the steam locomotive a couple of times. But I didn't know anyone there and I was pretty sure that I wouldn't be as welcome in the CNR bunkhouse by myself as I was when I was with my father.

Foleyet was a different story. My mom's sister, Violet lived there with her family and I had been there many times. I knew that I would be welcomed there. I had never been made to eat turnips at Aunt Vi's house.

I sat on the wood and metal bench in front of the booking-in room where all train and engine crews reported for duty and I waited for the first westbound train.

As luck would have it, a westbound freight train came down the mainline and the caboose (van) stopped in front of the office. 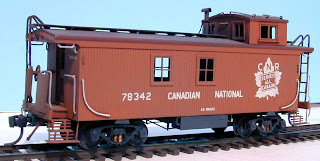 The incoming crew got off and the outgoing brakeman got on and lit the marker lamps that hung on the rear of the van. 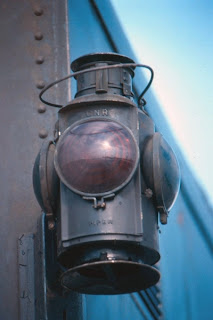 Within a few minutes, a soft yellow light warmed the windows on the side of the van and the brakeman got off and went into the office.  The engine was cut off and went to the shop to be serviced for the next trip and a fresh one was put on the train. 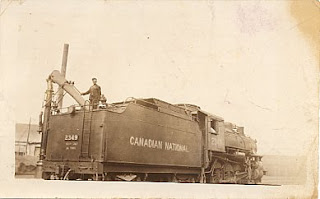 The conductor stepped onto the platform and turned to talk to me. He noticed that I had my packsack with me and appeared to be ready to board a train. When he asked me where I was going, I told him that I was running away from home and going to Foleyet to live with my aunt. Then I asked him if he would give me a ride on the van. With a broad smile, he said he'd think about it. He went back into the office.

In a few minutes, he emerged from the office and, seeing no company officers about, he picked up my knapsack and told me to climb aboard and stay out of sight. I knew very well what I had to do. I had been on trips with my Dad before and "unauthorized personnel" had to remain out of sight until the train had left the yard and was beyond the Yard Limit Board...just to be safe.

Two car men, having finished with their inspection of the train gave the conductor the OK to leave town and, stepping through the back door of the caboose and onto the platform, they walked slowly away toward their office on the other side of the tracks. 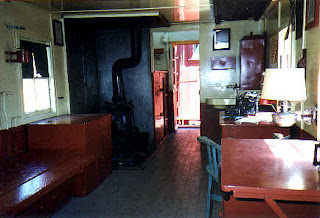 After settling me into a nice wooden chair with a pancake shaped cushion, the brakeman went out onto the platform with his oil lantern in his hand. I watched through the window as he raised and lowered the lantern, giving the engineer a "highball". The whistle on the top of the boiler blew two short blasts and, with a soft jerking motion, the train started to move. The brakeman climbed up into the cupola and the conductor pulled up a chair and turned up the Alladin lamp that hung on the wall above his desk. Reaching into his big leather satchel (every conductor carried a leather satchel and every engineer carried a metal box), he removed a big bundle of paper forms, held tightly together with several tan coloured wide elastic bands. There was also a list of every car on the train and he meticulously compared every number on the switch list with a number on each of the paper forms (car way bills).

The brakeman called to me, inviting me to join him in the cupola. I settled into the empty seat and, just like the brakeman, put my feet up on the metal grab bar that was bolted to the wall beneath the window. I slid the windows open and placed my elbow on the window sill.

As the pine trees, lakes and rivers of CN's Ruel subdivision slid past in the gathering dusk, I fell in love with the rhythm of the caboose running on steel rails. The rail joints, bolted together every 20 feet created a slight rocking from side to side and the classic "clickety-clack - clickety clack" sound of a passing train.

Eventually, he climbed down from the cupola. He went to the pot-bellied cast iron stove that stood in a corner near the cupola ladder. Raising the lid on a box that stood next to the stove, he brought out paper and kindling wood and stuffed it all into the stove. Striking a match, he held its flame against the paper and in a few seconds the kindling started to snap as it caught fire.

As the fire gained momentum, he filled the kettle with water from the small tank on the wall above the sink and swung it over to place it on the top of the stove. Soon, he was adding some lumps of coal to the fire. The tea pot and three cups followed, and before long, we were sitting around the conductor's desk, drinking a cup of hot tea and munching on fried egg sandwiches.

That was the best fried egg sandwich I'd ever eaten and I was surprised how tasty toast could be when it smelled of coal smoke. And there wasn't a turnip in sight.

The train rolled rolled through the summer night, the only sense of motion being the clickety-clack of the wheels on the rails and the occasional passing of the full moon through the pine trees along the right of way. Listening to the music of the rails, I fell asleep, sitting on a bunk near the coal stove. 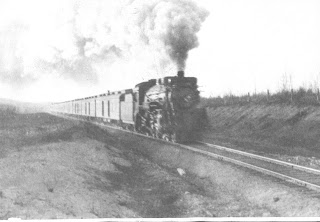 1927 Silk Train just south of Capreol, Ontario
Sometime in the night, the train came to a stop and there was stirring and talking in low voices in the van. I woke up on the soft mattress covered by a scratchy woolen blanket, with my head buried in a feather pillow that smelled lightly of coal oil.

Sitting up, I could see lights outside, and a station platform and men walking toward the van. The conductor who had let me ride with him held out his hand and helped me onto my unsteady legs.

I thanked him for the ride and the sandwich, and the great time I'd had. Picking up my knapsack, I stepped off the van and headed toward Aunt Vi's house, about a block away. Dawn was breaking and Robins were singing somewhere in the still-sleeping little town I knew so well.

As I turned the corner, I saw that her house was lit up like it was supper time...and aunt Vi was standing on the back porch in her cotton dress and flowered apron. Her hair was tied up in a bun on top of her head. She called out to me to come in and sit down for a bowl of soup and a piece of toasted home-made bread. She said she "had a feeling" that I was coming to visit her so she got up early to welcome me.

Years later, I learned that the conductor had gone back into the station at Capreol and phoned my mother to tell her that I was at the station, intending to "run away from home" to travel to Foleyet. Mom said if the conductor was willing to take me there, she'd phone her sister and let her know that I was coming on the freight.

I rewarded Aunt Vi by coming down with the mumps and I was sick for a week.
Posted by Bruce at 2:43 PM

Email ThisBlogThis!Share to TwitterShare to FacebookShare to Pinterest
Labels: First solo train ride, inside a working caboose., riding the rails, running away from home

I'm happy to report that his mother confirms this story as factual. The turnips, the running away part, and the mumps!

I just think its neat that a kid could do this way back when and still be safe.

Hope to follow along as you 're-live' for us to enjoy and do-some-'membrn' of our-own.